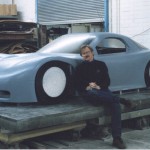 June artist of the month is Dave Lynn, a resident of Huntley Hills since 2003. Dave grew up in Atlanta and graduated from Pace Academy in 1982. He has lived or worked inChamblee since 1991. An automotive enthusiast since he could crawl across the rug with his Hot Wheels, his passion for all things automotive knows few bounds.

Dave studied mechanical engineering at the University of Rochester (Rochester, NY) with an eye towards a career in automotive engineering but ultimately left with a degree in English. Then it was on to the Art Center College of Design in Pasadena, CA where he earned a BS in the renowned Transportation Design Program.

In late 1991 the chance to work in racing brought Dave back to Atlanta to work for Jim Downing. During his time at Downing / Atlanta, Inc he was responsible for a number of endurance racing prototypes. One of the cars that Dave designed carried Wayne Taylor to the inaugural IMSA WSC Championship.

Dave designed three cars that raced in the 24 Hours of Le Mans. The 1996 excursion resulted in a class victory.

The Kudzu DLY began its illustrious career by finishing third in the inaugural Petit Le Mans at Road Atlanta behind a factory Porsche and a Ferrari, not bad for a car that comes from a shop under a bridge here in Chamblee. “As the design engineer for a very small manufacturer I was able to be involved in every aspect of the car from the suspension geometry to the graphic design to putting fuel in the cell during the wee hours of endurance races – great for keeping the peace between your right and left brains; not so good for sleep.”

In 2002 Dave entered the industrial design Masters program at Georgia Tech where he met his future partner Tracey De Poalo and began teaching industrial and automotive design. Automotive design education was the topic of his thesis. He has also been a major force behind the annual Georgia Tech Auto Show. Dave loves to share his passion for automobiles and design in general. “These days so much of design is done on the computer but a strong foundation in traditional media – pen and paper – is critical to a design education.”

It is only a bit of an exaggeration when Dave says, “Given the opportunity I would draw 24 /7.” These days racecar design engineering, industrial design, teaching, and writing have largely given way to raising a son, coaching youth soccer, and tending to the garden but soon the drawing board will again be covered with pencils, markers, and paint.

Anyone interested in more information about Dave and his design artistry is welcome to contact him via email at Racerpen@gmail.com.